In our company we have quite a few custom process templates for TFS, most of these have been around for quite some time and have been updated as new versions have come along. Recently I was asked by a number of people why their changes made to the Form Layout don't get reflected in TFS 2013 Web Access, and after taking them though all of the things to check (IIS Reset of the AT, clear work item cache etc), they still failed to show up.

So I started digging. First thing we found is that Web Access can get cranky if Custom Work item Controls are missing. Visual Studio will happily render a TextBox or DropdownBox so that you get some working UI, Web Access behaves slightly different; it just hides the whole control from the form. So if you're using any custom controls, make sure that they're installed on both the Web Access server and inside the version of Visual Studio you're using to change the process template. They should be listed and enabled on the Admin page: 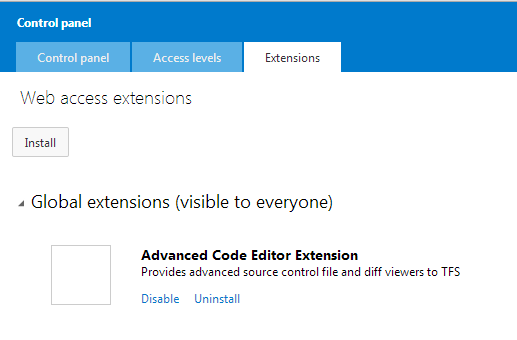 There's a very funny 'bug' in the Power Tools Process template editor, it will not tell you that you're missing a control. It will simply show FieldControl in the UI, since the PreferredType isn't available from the Work Item Form Designer. Very annoying, so it took some actual XML digging to find items like these.

And then the second thing we ran into, is that many of our old work item definitions used to have more than one

A thing to look out for when using the Power tools is that again it doesn't show you everything. When you open a WIT that has multiple layouts, the Power Tools designer will only show you the *first* one. It doesn't even tell you that there are others.

The "require approval of the most recent push" protection rule was recently introduced (oct 2022).