Gian Maria Ricci already covered a nice overview of what's new in the install experience of TFS 15 in the latest Preview Release. Let's walk through the new features in the product... though I suspect that many of you won't see a lot of surprising things, given that many of the features have been released to Visual Studio Team Services in the past months.

A quick scan through all the tabs and pages of Web Access reveals a cool number of new features, though maybe not yet as many as you had expected. Just remember that the time between releases has steadily gone down from 3 to 2 and now only 1 years. The differences are no longer earth shattering, but still very welcome!

At the server level you'll see the that TFS15 will ship with a new Build Agent. The new build agent is built using .NET Core which makes it compatible with Windows, Mac and Linux. This will bring it on par with the Visual Studio Team Services agent again.

The new agent supports NTLM authentication for the other platforms as well, removing any need for configuring the TFS server with Basic Auth. (yay!)

I'd expected to see an option to manage or configure search, but this is currently done from the TFS Management Console. At the moment there isn't much to manage after configuring it in the installer: 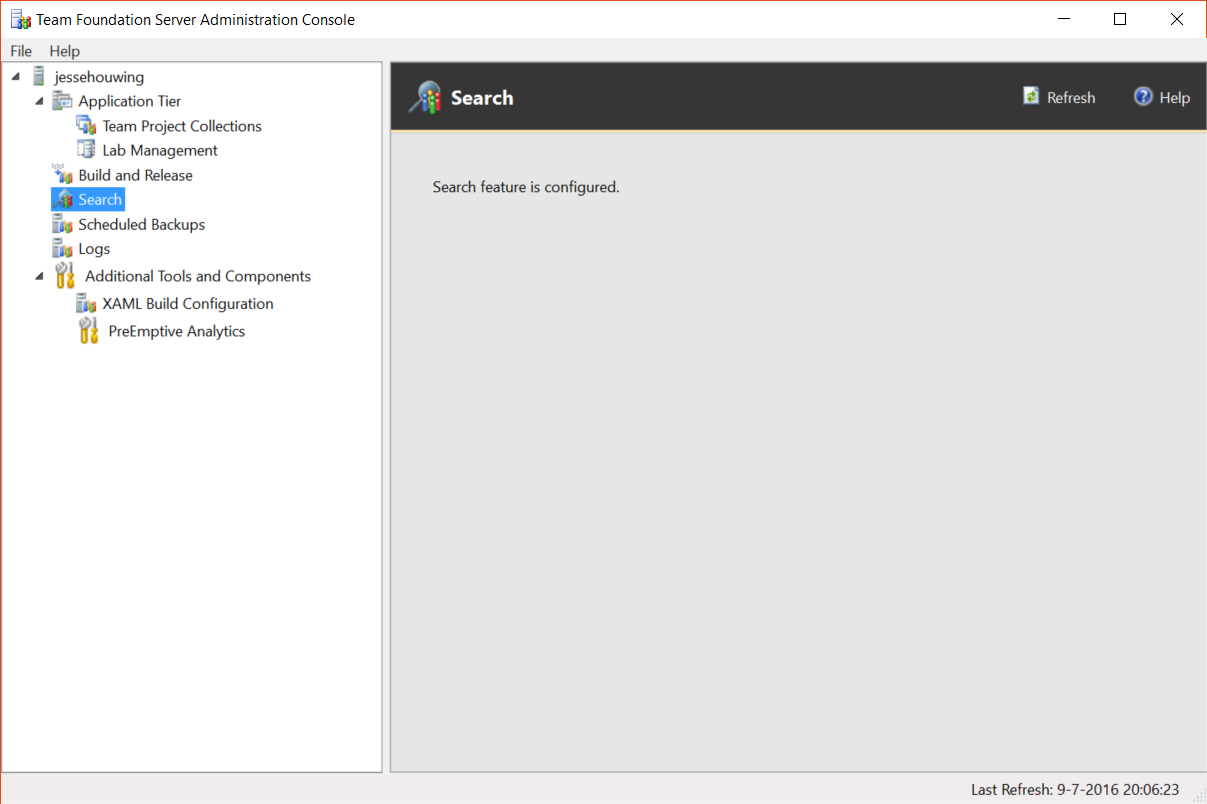 After installation you'll have the option to enable the new work item form for your existing Team project.

Clicking the Enable option will prompt you your current Work item Forms will be layed out according to the new layout. 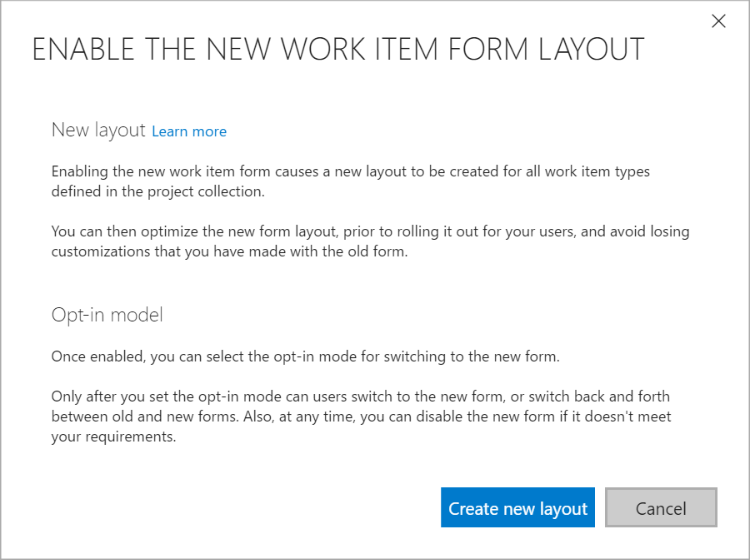 Once projects have been updated with the new layout, you can switch to the "new form only" mode.

After enabling the new work item form the old (windows forms based) forms in Visual Studio and Excel will drop you into the Web part of Visual Studio to edit work items.

Another great new addition is the ability to see and manage alerts for other users. I can't tell you how often I've been asked to "turn off those bloody email messages" by users after they had (sometimes long ago) configured alerts and had no idea where all the email started coming from after another 8 users joined the project.

By entering the username of another user you get an overview of all the alerts configured for them and if you have the proper permissions you can even edit and delete them. Nice!

It looks like that with the new Agent and a bit of time the issue that file share drops were never cleaned up have been resolved. You can now configure retention for files dropped to file shares as part of the "Copy and publish build artefacts" tasks in Build: 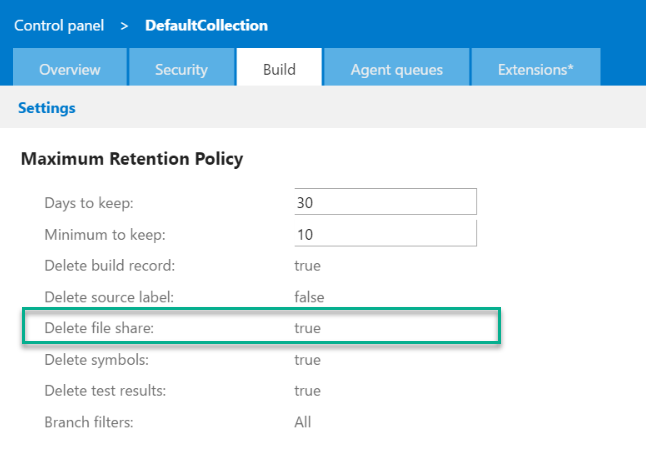 I'd already mentioned the new work item form, while some people love it, others still are having a difficult time to come to terms with it. I like it very much. Unfortunately the new Process management features where you can add/remove fields from the UI hasn't made it to TFS yet. Let's hope the team manages to port that in the months leading up to the final release.

Test and Tasks on the PBI

For teams doing Kanban and for Product owners who spend most of their time at the Backlog level (instead of the Sprint level) there is now an option to track the tasks and tests for each Product Backlog Item. So even if all the tasks are done, you can see that maybe not all tests are passing. 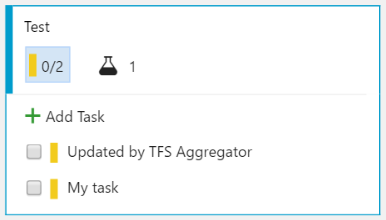 You can now create a new Git branch when you or your team starts working on a new Product Backlog Item, promoting feature branches and making it easier to implement common process flows like GitFlow.

Another option enabled from the same context menu is the option to start exploratory testing right from the task board. which is a great feature for teams that do want to have end-to-end traceability of their tests to their Product backlog Items, but do not use the Test Case Management options of TFS, possibly because they to ATDD using a tool like SpecFlow to handle their test cases for formal tests. For informal tests they can now launch directly from the backlog.

Both options are also available from the backlogs and boards: 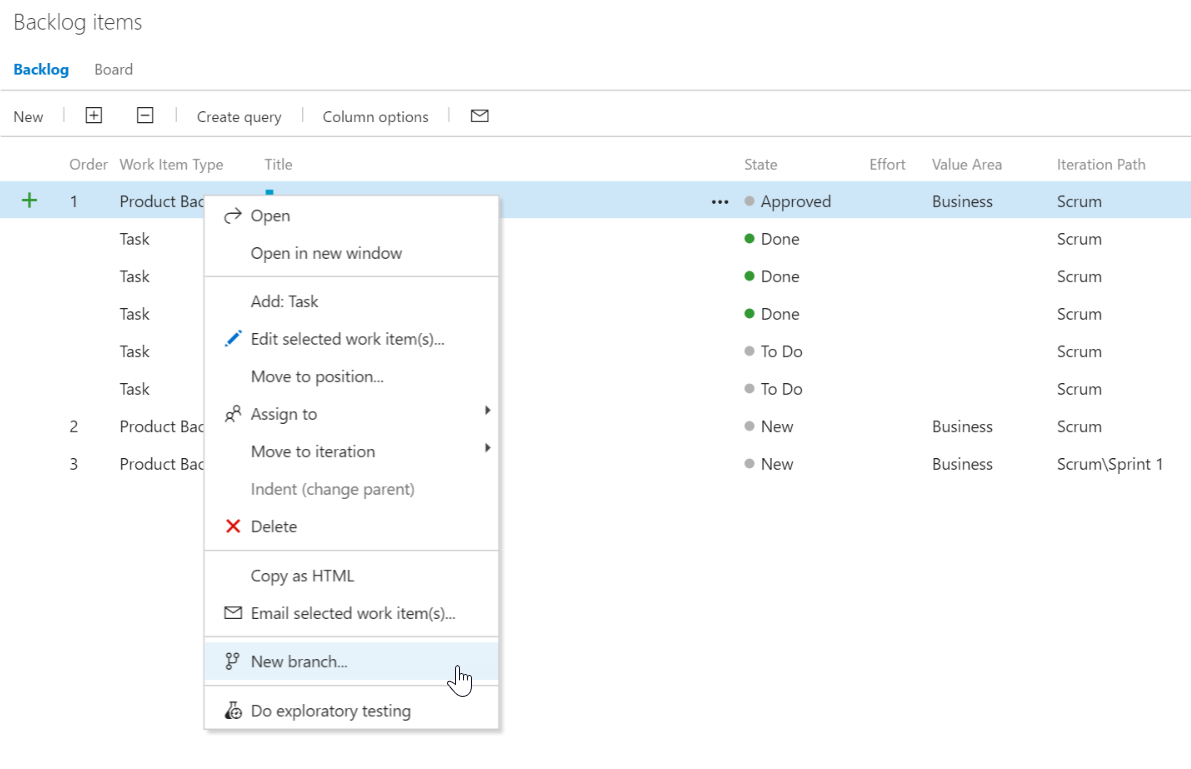 I've already mentioned the new Build agent and the new build retention. Another great addition is that of Subversion and External Git. I'm guessing (from the fact that the Service Connection dialog exists) that GitHub will be supported too, but for now it doesn't show up on my instance. 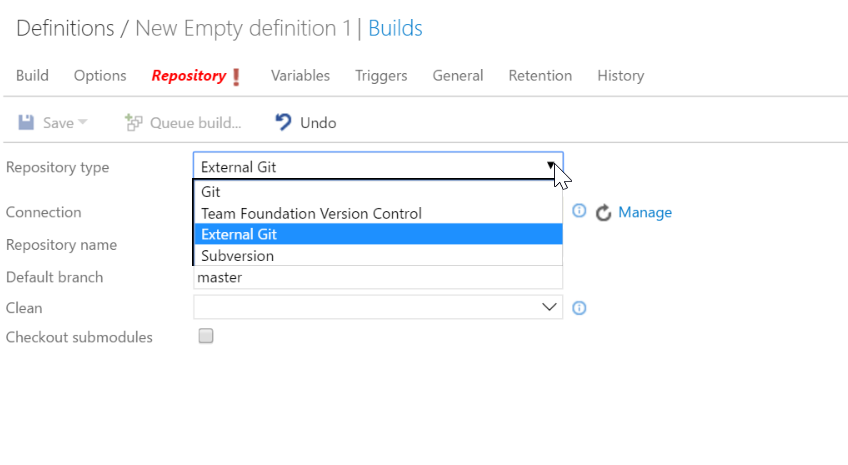 GitHub does already appear as a artifact source for Release management, though I can't get it to work at the moment: 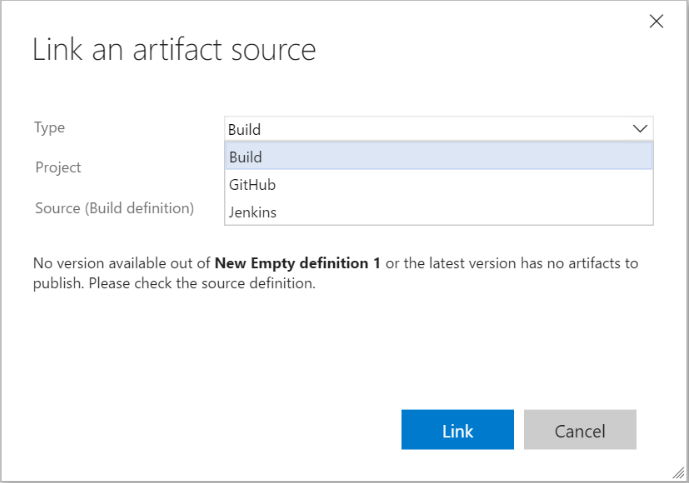 Another great new feature, which has been available as an extension for VS Team Services for a few months now is Code Search. While it does bring a few interesting twists to TFS at the admin level (it requires Java to be installed and kept up-to-date by the server administrator), it makes it much easier to find pieces of code anywhere in TFS.

I can't tell you how often I dig through GitHub trying to find examples or similar pieces of code from the pieces I'm working on when venturing into little documented area's of existing products, like the new Build Engine piece of TFS and Visual Studio Code.

This will now also come to on-premise TFS servers, allowing much easier code re-use and discovery throughout the enterprise: 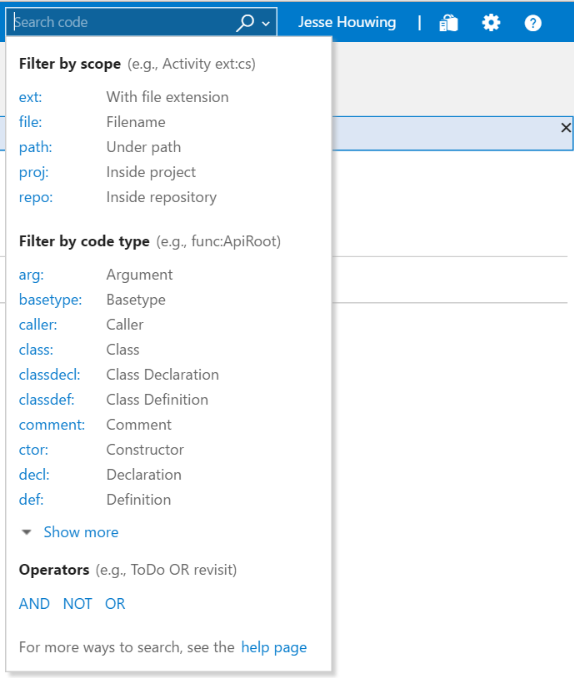 I'm really looking forward to the new version of Team Foundation Server. The new installer features to make it easier to do trial upgrades are very welcome, and I believe that with Code Search, new Build Agent and the fresh Work Item look & feel it provides a nice upgrade to existing users as well.

Dig deeper into the news features over on the Release Notes page.

When you're using Visual Studio behind a Basic Authenticaton proxy, you may run into issues restoring Nuget packages. While I've never found a real solution for the issue, and trust me I've tried quite a few workarounds like the ones listed here. You'll get